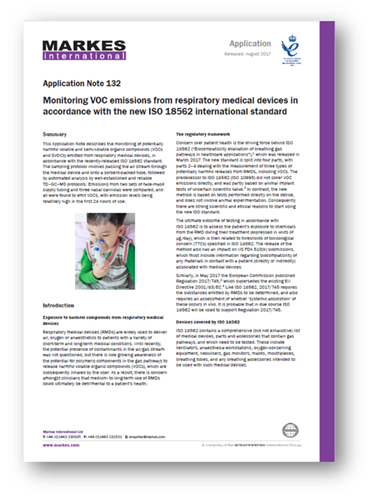 Respiratory medical devices are widely used in the field of medicine, but there is now growing awareness of the potential for polymeric components in the gas pathways to release harmful volatile organic compounds (VOCs).

These compounds are then subsequently inhaled by the patient, leading to concerns that long-term use of the devices could ultimately be detrimental to a patient’s health.

As a result of these concerns, a new standard (ISO 18562), was released in March 2017. This deals with the measurement of various emissions from respiratory medical devices, including VOCs, and is expected to be widely adopted.

Emissions from two sets of face-mask supply tubing and three nasal cannulas were compared, and it was found that they all emitted VOCs, with emission levels being relatively high in the first 24 hours of use. Over 100 compounds were identified across the five samples, as well as a substantial hydrocarbon/oil-like response.

Please complete the form below to download the full application note