Markes International’s outstanding success in exporting scientific instrumentation has been rewarded with an accolade from the UK’s Department for International Trade (DIT).

The Board of Trade Awards, which are nominated and selected by the DIT, were this year awarded to eight Welsh businesses showing exceptional innovation, delivering prosperity to their local communities, and championing free trade.

The judging panel were “particularly impressed with Markes International’s fast growth and recent expansion into China”, and recognised the company “as a strong example of overseas development, and for its utilisation of the tools available to push into new markets.”

This year’s awards were presented by The Rt Hon Dr Liam Fox MP (Secretary of State for International Trade and President of the Board of Trade) and the Rt Hon Alun Cairns MP (Secretary of State for Wales), at an event at Swansea University on 15 November. In presenting the award to Markes' Managing Director Tim Hawkins, Dr Fox said “I wish all of our companies were like Markes International”.

Hawkins commented “We are very proud to have received this award from DIT, and believe it stands as a testament to the many years of effort we have devoted to strengthening the profile of our analytical instrument business overseas.”

“It is particularly gratifying that the judging panel have recognised our efforts in Chinese markets, which remain a core focus of our efforts. As an illustration of our expansion in this region, our overall sales in China have doubled over the last 3 years, and earlier this year we opened a technical support centre in Shanghai to support our growing customer base in the country.” 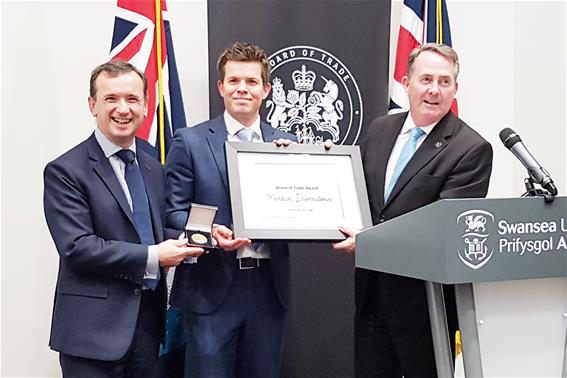 Hawkins concludes “The award serves to illustrate the strengths of our business – a strong desire to understand our customers’ needs, identify new market opportunities, and make the necessary investments. This has been a recipe for success since our establishment in 1997, and one that we believe will continue to deliver for us in the years to come.”

Markes International is a specialist manufacturer of instrumentation for the detection of trace-level VOCs and SVOCs in liquids, solids and gases. Established in 1997, Markes has a well-deserved reputation as the world’s leading authority in analytical thermal desorption, manufacturing and selling a comprehensive range of instruments, sampling equipment and supplies that enhance the analytical capability of GC–MS. Markes has a strong history of innovation in thermal desorption, now complemented by expertise in other sample preparation techniques including high-capacity sorptive extraction, SPME and headspace. In recent years Markes has also gained recognition for its innovative, high-performance time-of-flight mass spectrometers for GC, which are available through its sister company, SepSolve Analytical.