The specialist analytical instrumentation manufacturer had moved its entire Welsh operations in March this year, relocating from Llantrisant to a newly refurbished site in Bridgend which is twice as large as its former premises. 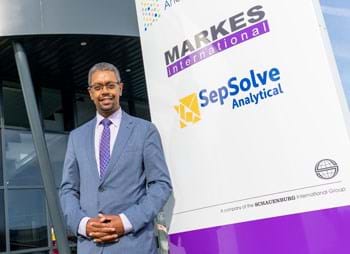 Before cutting the ribbon, Hawkins and Markes’ Head of Business Operations, Pamela Simpson, took Economy Minister Mr Gething on a tour of the site, starting with the company’s demonstration laboratory before moving onto its 52,800 square foot factory and bespoke-fitted research and development facilities.

Markes develops and manufactures all of its specialist laboratory instruments at the site, which is its largest in the UK. Markes also has sites in the US, Germany, Canada, China and Asia-Pacific. The company’s instruments are used to detect chemicals in solids, liquids and gases in much smaller quantities than have been previously possible. The instruments are used in numerous sectors such as environmental monitoring, defence and forensics, food and drink – and often in ground-breaking ways, such as detecting COVID-19 and cancer in breath and biological samples.

Explaining why Markes had chosen Bridgend to relocate to, Hawkins said: “Location is everything for a manufacturing business like ours. This is an established industrial area, so we benefit from a readily available skill set. Also, Bridgend has great transport links – the M4 is just minutes away, as is Cardiff airport. Plus, as a scientific company, we have strong partnerships with national [Welsh] universities, both for shared research projects and also as a resource for our graduate and postgraduate posts.” 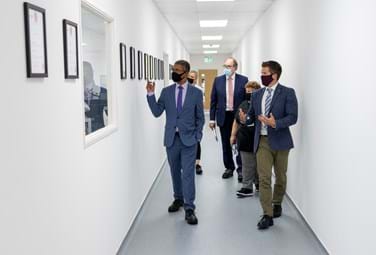 Following his tour, Economy Minister Mr Gething said: “It was interesting to learn that Markes doesn’t just invent and make the instruments it sells the world-over, the business is also involved at an industry ‘grass roots’ level, often sitting on the boards of standards agencies like ISO, CEN and the FDA and helping to establish actual testing methods. It’s another example of a Welsh tech company setting the global standard for excellence – literally, in Markes’ case.

“It was a pleasure to visit and meet the staff and to officially declare the site open, and I am delighted we have been able to support the company via our Business Wales service. I wish Markes every success with their continued growth trajectory.”

After the visit, Sarah Murphy (MS for Bridgend and Porthcawl) commented in her Twitter feed: “We’re fortunate to have such an excellent factory and technical centre for research, manufacturing and engineering in our community, and Wales.”

Markes’ Founding Director, Alun Cole, said: “We were absolutely delighted that Economy Minister Mr Gething could come and see the site for himself, and very grateful to him for doing the official opening. We’re a Welsh ‘born and bred’ company and have almost 140 staff here in Bridgend, so it was a proud moment to be able show a Welsh Government Minister around.”