The Peltier effect – a ‘cool technology’ for thermal desorption 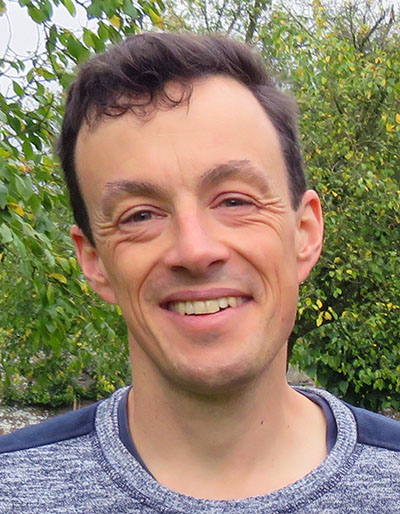 Peltier cooling is one of the key technologies incorporated into Markes' thermal desorption instruments, but what's the physics behind it?

The Peltier effect, despite being first noticed by Jean Peltier in 1834, remained a backwater of physics for over a century. However, in the last few decades, the technology has experienced a revival, leading to its incorporation into a number of commercial systems, our thermal desorption instrumentation being one. To understand why we use it, let’s first take a look at what the effect is.

The Peltier effect is the heat exchange that results when electricity is passed across a junction of two conductors, and is a close relative of the Seebeck effect (effectively the same phenomenon in reverse, used in thermocouples used to measure temperature), and the Thomson effect (generation of electricity along a conductor with a temperature gradient). Sparing ourselves the maths, conduction electrons have different energies in different materials, and so when they are forced to move from one conductor to another, they either gain or lose energy. This difference is either released as heat, or absorbed from the surroundings.

Therefore, when two conductors are arranged in a circuit (see diagram), they form a heat pump, able to move heat from one junction to the other. Unfortunately, though, it’s not always this simple, as the Peltier effect is always up against the Joule effect – the ‘frictional’ heating that results from electrons bouncing off the atoms. In most systems, this swamps the Peltier effect, and means that all that you get is a bit more heating at one junction, and a bit less heating at the other.

Such problems hindered the development of practical Peltier coolers, and it took the development of suitable materials for the technology to really take off. In modern devices, semiconductors are normally used, with many ‘couples’ like those in the diagram being formed into an array. Linking them together is a thin metal film, while ceramics are used for the cold and hot ‘plates’. 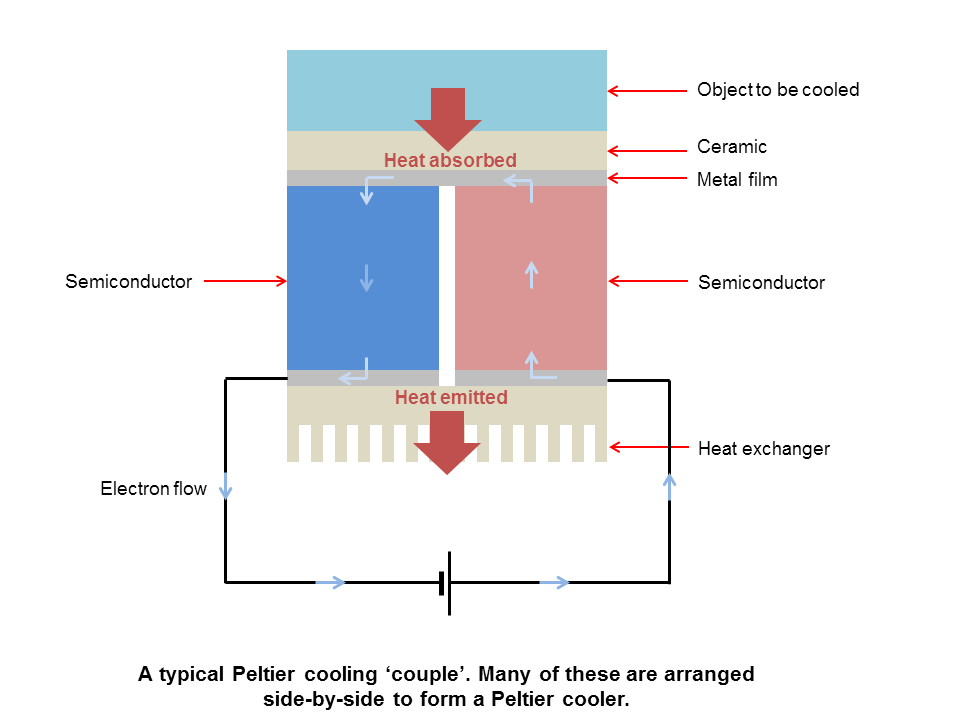 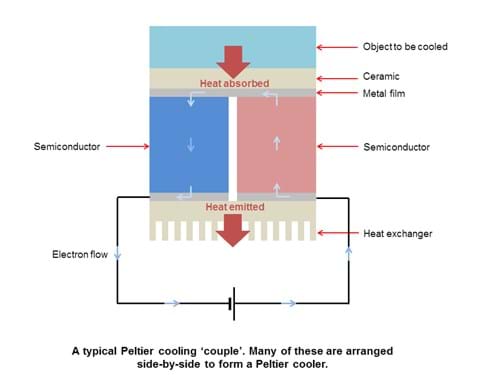 A typical Peltier cooling ‘couple’. Many of these are arranged side-by-side to form a Peltier cooler.

Why use Peltier cooling in thermal desorption instrumentation?

The most obvious benefit is that Peltier coolers don’t use liquid cryogen. This is a big advantage for thermal desorption technology, sparing the analyst from the cost and trouble of keeping the instrument topped up with liquid cryogen, and making it much easier to run automated cycles.

In addition, Peltier units are small, and because they have no moving parts, they also have a long lifetime. In our thermal desorbers, we use stacked Peltier units to get down to the low temperatures needed to quantitatively trap the most volatile analytes like acetylene in canister and on-line air samples.

So why aren’t Peltier coolers used more widely in consumer products? The main reason is their relative inefficiency – typically only 0.5 J of cooling is achieved for every 1 J of electricity used, making them roughly an eighth as efficient as a modern refrigerator. In the case of our thermal desorbers, this doesn’t really matter because we’re only cooling a 6 cm length of a focusing trap. However, the energy consumption becomes significant when cooling larger objects, and that’s why Peltier cooling is not yet routinely used for refrigerators or freezers.

Looking to the future, improvements in the materials used to make Peltier coolers are starting to make the technology more appealing, and already they can be found incorporated into portable devices for cooling drinks and the like. It’s possible that with further advances, the efficiencies of Peltier coolers may start to approach that of modern refrigeration systems, and this intriguing aspect of physics may start to feature more in our everyday lives!

To find out more about the advantages of Peltier cooling for analyte preconcentration compared to cryogen-cooled and fan-cooled systems, download our Instant Insight document:

Can you really trap very volatile compounds without liquid cryogen?

Analysing very volatile organic compounds (VVOCs) in ambient air using canisters or on-line techniques requires a combination of strong sorbents and low temperatures. In the past, all TD instruments used cryogen (primarily liquid nitrogen) to cool the focusing trap, but the expense and inconvenience of this approach has led to the emergence of other techniques – namely electrical (Peltier) cooling and fan-cooling. In this Instant Insight, we describe how the Peltier cooling technology used in Markes’ instruments offers reliably high and economical performance for the analysis of VVOCs (as well as other VOCs), placing it at a considerable advantage compared to cryogen- and fan-cooled technologies.

There is absolutely no need to compromise on cost and waste your lab’s budget.

‘Cost saving in 60 seconds’ – in the video below, we explain how Peltier-cooled traps can achieve -30°C without the expense or hassle associated with using liquid cryogen.