US EPA Method TO-15 defines performance criteria for the sampling and analysis of volatile compounds in air contained in canisters, and is primarily employed for the monitoring of airborne pollutants in urban and industrial environments.

US EPA Method TO-15A was introduced in 2020 to address the requirement to detect ever-lower levels of analytes in ambient air.

What does Method TO-15 involve?

Method TO-15, which is the successor to Method TO-14A, is a ‘performance-based’ method for the analysis of subsets of the 97 hazardous pollutants listed in the 1990 Clean Air Act Amendments. It does not offer detailed method guidance, but instead defines criteria for acceptability of performance, and as a result, many of the experimental aspects are described only in the broadest terms.

However, a typical procedure involves drawing the sample atmosphere into an evacuated canister (usually 1 L or 6 L in volume). The canister is then transported to the laboratory, where the sample is preconcentrated onto a focusing trap within a thermal desorber, followed by GC–MS analysis.

Samples taken for analysis in accordance with Method TO-15 are often from humid environments, and this is a point that requires careful consideration, as existing methods such as Nafion dryers can cause loss of certain ultra-volatiles.

Running TO-15 with hydrogen carrier gas

The increasing cost, coupled with shortages of helium is impacting laboratories, where helium has typically been used as a carrier gas for GC.

Hydrogen, as an alternative to helium as a carrier gas for GC and GC–MS, offers many advantages:

Markes' award winning Multi-Gas instruments have been independently certified for operation with the choice of helium, nitrogen and hydrogen, giving labs the option to use hydrogen as a carrier gas to eliminate their reliance on helium availability.

Conveniently, hydrogen can be generated on-site on-demand using a generator, for a cost-effective, low maintenance operation of TO-15. This protects against current and future helium shortages, while meeting all the performance criteria cited in US EPA Method TO-15, including linearity, reproducibility and method detection limits (MDLs).

Increasingly, analysts are finding that the criteria in Method TO-15 are not stringent enough to address the requirement to detect ever-lower levels of analyte concentrations in ambient air.

In 2020 there was an update to US EPA Method TO-15 to better address these lower concentrations seen in ambient air. This is US EPA method TO-15A.

The method detection limit for US EPA Method TO-15A is 20 pptv. This is a level which challenges every aspect of the sampling and analysis process.

Whilst background interferences generated by instrumentation and sampling equipment has always been a concern for trace air toxic analysis, these levels pose even more of a challenge. 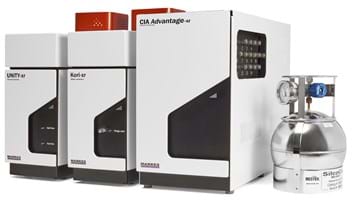 This is where Markes’ automated canister pre-concentrator (UNITY–CIA Advantage-xr) and technologically advanced water management (dehumidification) module (Kori-xr) coupled with GC-MS is the solution.

Crucial to this is the dehumidification provided by Kori-xr, which prevents the analyte loss associated with other water management approaches.

This instrument set-up – which operates cryogen-free and features Markes’ Dry-Focus3™ technology – exceeds the requirements of US EPA Method TO-15A.